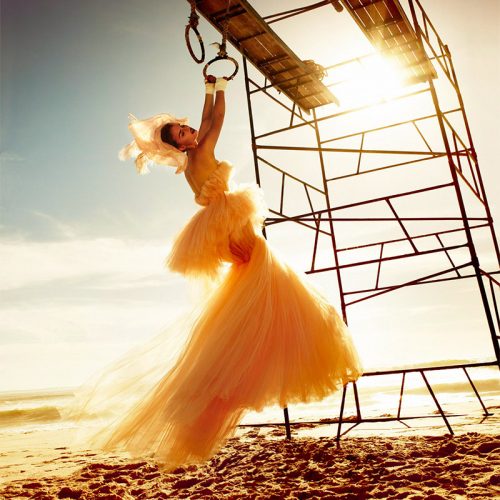 Kristian Schuller
The Romanian-born master of colours started his work in the fields of fashion and photography already in his early youth in Germany. At first he modeled for his own pictures, but at the latest when he became a student of Vivienne Westwood’s (Fashion Design) and F.C. Gundlach’s (Photography) his great talent became apparent to others.

His work for magazines like Vogue or Harper’s Bazaar and for companies such as Swatch, BMW or Nike have made him famous on the scene. Top models and actresses like Penelope Cruz (the latter for the Campari Calendar 2013) have been in front of his camera. He does not consider himself particularly famous, as he revealed in an interview for the “Süddeutsche Zeitung”:   “I have always tried to be a proper photographer. I am not a star just because I have photographed one or two celebrities. Peter Lindbergh or Annie Leibowitz, they are real stars.”

If, however, the name Kristian Schuller does ring a bell, it may have something to do with Heidi Klum. His work for the casting show “Germany’s Next Top Model” finally offered him the chance to realize a high class book project: “90 Tage. Ein Traum”. The gorgeous locations, the models of the future, and Schuller’s meticulously designed scenes, that seem like a mixture of circus and Fellini’s films, are just a feast for the eyes.  This book, that is highly recommended even to critics of the show, has deservedly won the silver medal of the “Deutscher Fotobuchpreis 2011”.

Schuller’s pictures at Atelier Jungwirth show a world of colourful contrasts, where even black and white images can have a remarkably opulent effect. The common ground between Schuller’s fashion- and advertising photography probably lies in the imagery created by the artist, brimming with power and joy for life and the extraordinary embodiment of radiant femininity, which are immediately imprinted on the spectator’s memory.

One thing is certain: This exhibition at Atelier Jungwirth will be a fascinating experience, even for people who have seen and experienced a lot. Or: Rock’n Roll for the eyes.

Contact
Should you have any further questions on Kristian Schuller or our studio, please feel free to contact us here.