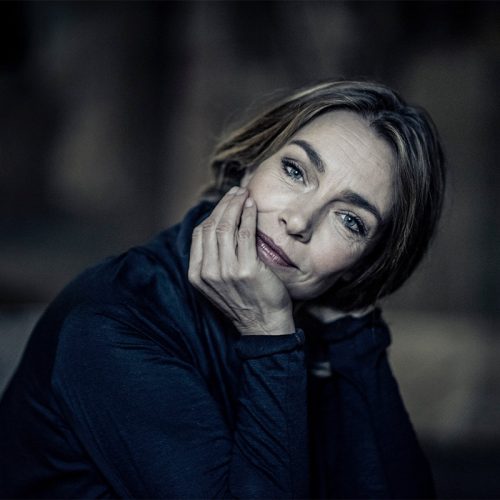 Aglaia Szyszkowitz was born in Graz in 1968. After passing the school leaving examination she started to study medicine but soon found her vocation on stage and in front of the camera. She successfully completed the drama school at Vienna’s Volkstheater and performed her first roles in Krefeld, Würzburg and Münster. Her versatility was remarkable even then – from “Faust” to “The Rocky Horror Picture Show”.

Her television and film career began in 1995. Comedies and murder mysteries including the German series “Tatort” and “Polizeiruf 110” made her known to a wider audience. From 1999 until 2013  Aglaia Szyszkowitz was to be seen in the role of police inspector and lawyer in the Hamburg detective series “Jenny Berlin / Einsatz in Hamburg”.  In the cinema many people admired her in the films “Das Sams”, “Klimt” together with John Malkovich, “Almanya – Willkommen in Deutschland”, “Sams im Glück” and many other top-class productions.

Of course, she never really forgot the stage. With her performance she made plays based on literary material by Daniel Glattauer, in particular, (“Gut gegen Nordwind” – “Love Virtually” – and “Die Wunderübung”) into box office successes.  At the beginning of February the film “Die Wunderübung” will premiere at cinemas in Austria. In addition to Aglaia Szyszkowitz, main roles are also played by Devid Striesow and Erwin Steinhauer. The film was directed by Michael Kreihsl.

In private life Szyszkowitz likes to pursue sports but is also very musical.  She sings and has also learned to play the violin, the piano, the accordion and woodwind instruments.

Christian Jungwirth has met and photographed Aglaia Szyszkowitz on numerous occasions over a period of 15 years. His exhibition to mark the actress’s 50th birthday shows both personal photos as well as press shots. Jungwirth (* 1961) is one of the most distinguished photographers in Styria and works internationally, in particular, in the fields of advertising and magazines.

Besides his own work he has also supported the interests of colleagues. Since the establishment of Atelier Jungwirth, 27 exhibitions have already been held here. In addition he initiated the group show “Menschenbilder” (Images of Humanity), which in the meantime can be seen throughout Styria and has also been adopted by 5 federal provinces. Together with his team Jungwith also organizes, inter alia, international workshops with the US star Greg Gorman. www.christianjungwirth.com

Contact
Should you have any further questions on Christian Jungwirth or our studio, please feel free to contact us here.