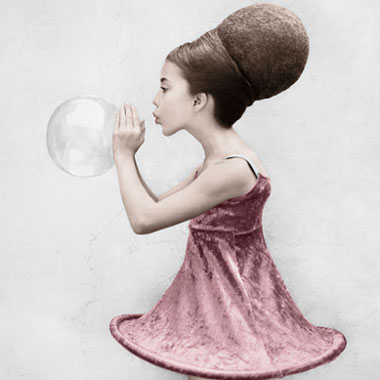 Vee Speers, the photographer (born 1962 in Newcastle, Australia), has lived in Paris since 1990. Her unusual portraits, for which she has become well known, combine minimalism and theatricality. Her ‘Bordello’ series showed Paris brothels in all their timeless elegance, and the women who work there are depicted with respect rather than a voyeur’s eye. A number of other series gained a lot of international attention, particularly the one called ‘The Birthday Party’.

Starting wirth her own daughter, Vee Speers developed a series of highly staged (yet puristic) shots that mark the end of childhood and the beginning of young people’s entry into the world of adults. A child’s delight in disguise and costumes is contrasted with elements that make your smile freeze on your face: after all, the military props in some of the photographs refer not only to the (mostly innocuous) war games played by boys, but remind one of the sad fact that child soldiers exist in real life, in many parts of the world. The girls are done just as impressively, they stand there like stiff wax figures, yet there is something deeply disturbing about them.

Speers freezes her models’ postures: in this way, the young ladies and gentlemen look like determined – if somewhat lost – guests at an imagined fancy-dress party. Placed always in front of the same bright neutral backdrop and photographed at children’s eye level, these subjects and the entire series engage the viewer emotionally, calling forth both enthusiasm and irritation. ‘The Birthday Party’ has been shown in Ireland, Australia, and Germany, among other countries, and (most recently) at the new Fotografiska museum in Stockholm. The exhibition at Atelier Jungwirth will be the first showing of Speers’ pictures in Austria.

All pictures on exhibition are available in three formats!

Contact
Should you have any further questions on Vee Speers or our studio, please contact us here.