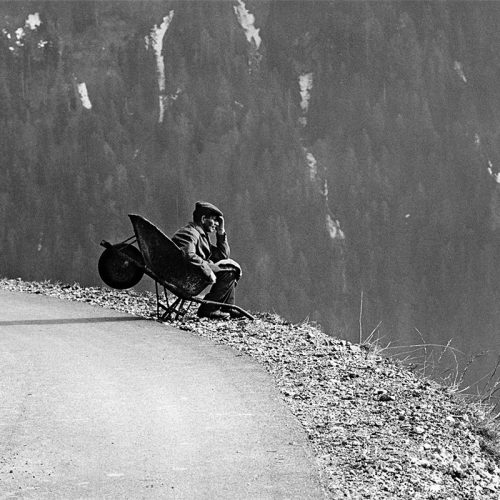 Nikolaus Walter
Nikolaus Walter, the photographer from Vorarlberg who was born in 1945 perfected his craft at Vienna’s Academy of Graphic Arts and started travelling around the world at an early age. First he was drawn to England and Ireland and later to the USA. His work in New Zealand and above all his series “Toronto Cowboy” from Canada also attracted international attention. Periods spent in Latin America, France, Spain, Portugal, Eastern Europa and India followed.

Nikolaus Walter primarily made a name for himself in Austria because he documented life in Vorarlberg better than anyone else. He portrays people and their surroundings in black and white photos which usually reduce everything to essentials. He is particularly fascinated by long-term social changes, which he captures with his camera. While doing this he neither blocks out accidental bizarre moments nor does he make social distinctions.

He was involved with to social institutions such as Caritas and took photos, amongst other things, for many years on behalf of Vorarlberg’s Landestheater.

Photos from his long term project “Steep Heritage – the Grosse Walsertal” will be on exhibition at Atelier Jungwirth. The photos in this volume comprise early work from 1977 to 1980 which will be contrasted with shots from between 2000 and 2002. The focus is on the harshness and beauty of the landscape and its associated impact on the way of life and way of working. But time does not stand still in the Walsertal either; the advent of modern and postmodern phenomena can be seen. The photographer looks closely and proves in this series that aesthetics and socio-scientific precision do not exclude one another.
Nikolaus Walter lives and works in Feldkirch.

Contact
Should you have any further questions on Nikolaus Walter or our studio, please feel free to contact us here.