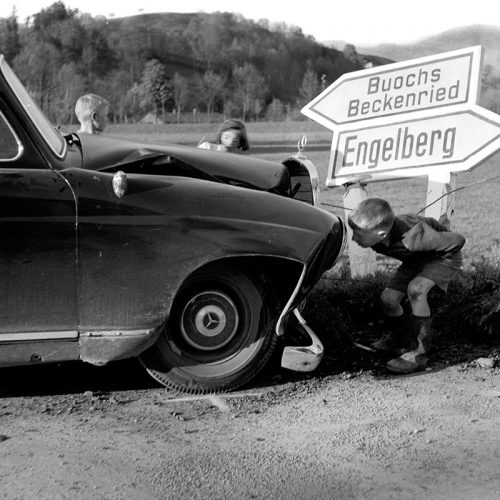 Arnold Odermatt
In 1948 Arnold Odermatt joined the police force in the Swiss canton of Nidwalden. In those days sketches were still made at the location of accidents in order to be able to reconstruct the events.  Arnold Odermatt, on the other hand, used a Rolleiflex for this task and thus contributed not only to the development of the Swiss police force but also to a new and extremely interesting perspective of documentary photography.

His work was also influenced by the style of the Magnum photographers, especially by Werner Bischof, whom he got to know personally.  Odermatt’s imagery is usually deliberately austere.  Scenes and objects like those in his now world-famous series “Karambolage” are at the centre of the image. In spite of the necessary reduction in size there is a clear artistic approach which was initially missed by the great majority of viewers.

Odermatt’s son Urs was the first person to liberate his father’s photographs, which after all spanned a period of four decades, from the police context and thus brought them to many galleries and museums. The pictures were shown, for example, at the 2001 Biennale in Venice, at the Art Institute of Chicago in 2002 or in New York, Strasbourg and Berlin over recent years. Some photos from the “Karambolage” series were shown recently in the exhibition “damage control” at the Kunsthaus Graz.

Arnold Odermatt has also been involved in the films made by his son Urs, in particular the film version of his life story entitled “Wachtmeister Zumbühl”.  A number of books have been published about his work. Urs Odermatt has arranged his father’s photographs in the groups of works Meine Welt, Karambolage, Im Dienst and In zivil. Arnole Odermatt celebrates his 90th birthday in May 2015.

Contact
Should you have any further questions on Arnold Odermatt or our studio, please feel free to contact us here.